The Network Monitoring Focus of the EventSentry SysAdmin Tools

We’ve already talked about the security-focused and “check” monitoring utilities included in the freeware EventSentry SysAdmin Tools, part of the larger EventSentry network-management solution. The SysAdmin Tools offer a set of graphical and command-line utilities designed to help you with your daily administrative tasks. These tools are always being honed to provide simple yet powerful functionality.

Fast Ping (Fping)
NETIKUS.NET introduced Fast Ping (fping.exe) years ago as part of the NTToolkit. The tool was developed as a way to offer a faster way to ping remote hosts. Frankly, we were annoyed by the built-in Windows ping, which is far slower than its Linux and Apple OS X counterparts. That’s right, on non-Windows OSs pinging a remote host (especially one that is online) is a lightning-fast prospect—so why not on Windows? Fping solves the problem.

Fping also offers some fun options. For example, you can use the Solaris-style syntax, which shows you only whether a host is up or down. You can check a TCP port instead of doing an Internet Control Message Protocol (ICMP)-based ping. You can play a sound on successful or failed ping—a more useful capability than you might think! You can also see silly comments, and you can save your presets—something you can’t do with any other ping utility.

The parameters of this command-line utility are straightforward: The required <host> variable identifies the host name or IP address to ping; the /brief (/b) parameter performs a quick ping and only indicates whether the host is up or down; the /count (/c) parameter determines the number of packets to send; the /defaultset (/w) parameter sets the current options as the default; the /comment (/u) parameter shows unhelpful comments when performing a brief ping; the /playok (/p) and /playfailure (/f) configure sounds; the /loop (/l) parameter pings indefinitely, allowing an abort with Control + C.

As part of the SysAdmin Tools, this utility is better than it’s ever been. In addition to those fun options, it is a fully customizable tool. You can control the number of packets, the packet size, sound, display mode, and the delay. You can even set your preferences and store them as the default. To check the TCP port, simply append a colon and the port number to the host name (e.g. fping www.eventsentry.com:80).

GetHTTP
GetHTTP (gethttp.exe) is a simple command-line utility to download files from a website through the HTTP protocol. Mostly useful for scripts, it supports HTTPS and proxy servers and shows the progress of the download in the command-line window. If you’re familiar with Curl (curl.exe), you have an idea what Get HTTP does.

IPMon+
An excellent troubleshooting utility, IPMon+ is a GUI tool that shows all TCP, UDP, ICMP, and ARP connection endpoints between the local computer (default) and remote hosts. It’s the graphical version of IPMon, offering functionality that isn’t available in the command-line version. 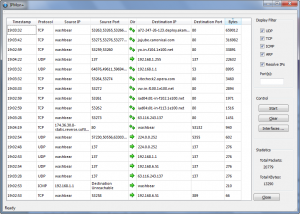 IPMon+ is terrific for troubleshooting network connections and revealing incoming and outgoing network traffic for those situations where you don’t need to see every packet detail. The tool monitors all network traffic on the specified interface and shows which hosts communicate with the local host, how much data is being transferred through the IP connection, the direction of traffic, and which UDP/TCP ports are used in the communication. If IPMon+ runs in promiscuous mode, traffic from non-local hosts is also displayed. IPMon+ and IPMon both require the free WinPcap.

NTP Client
A simple but essential tool, NTP Client (ntpclient.exe) checks the local time against an NTP server, and optionally updates the local time to match that of the server. NTP Client supports the Network Time Protocol (NTP) up to version 3 and takes network latency into consideration when setting the local time. (Note that NTP Client doesn’t run as a service, and as such will have to be called repeatedly if you want to keep the time of a computer synchronized.)

Network latency is taken into consideration when calculating the clock offset, providing precision down to milliseconds. The primary parameter of this command-line utility does all the work: The /set (/s) parameter sets the time according to the time retrieved from the NTP server.

PageSNPP
PageSNPP (pagesnpp.exe) sends a message to a pager using the internet-based Simple Network Paging Protocol (SNPP). The tool has a message limit of 1500 characters, but you can check with your paging provider to determine the maximum supported message length for your plan and device (usually less than 500). PageSNPP returns an %ERRORLEVEL% of 0 when the message was sent successfully, and an %ERRORLEVEL% greater than 0 when the message could not be sent.

WakeOnLan
The WakeOnLAN (WOL) utility sends a “magic” packet to a remote network interface card (NIC), based on the MAC address. If the NIC supports the Wake On LAN feature (and the feature is enabled in the computer BIOS of the computer), the computer will power on automatically after receiving the packet. You can also send the magic packet to a router, if the router supports direct broadcasts.

The primary parameters of this command-line utility do all the work: The required <MAC Address> variable identifies the MAC address without delimiters, and the /IP Address (/ip) parameter identifies the IP address to send the packet to (usually a router) if the remote host is not in the local subnet.

More to Come!
This is just a taste of the free, constantly evolving tools available in EventSentry SysAdmin Tools. Give them a try—you won’t be able to stop with just one.