Discovering vulnerable Log4J libraries on your network with EventSentry 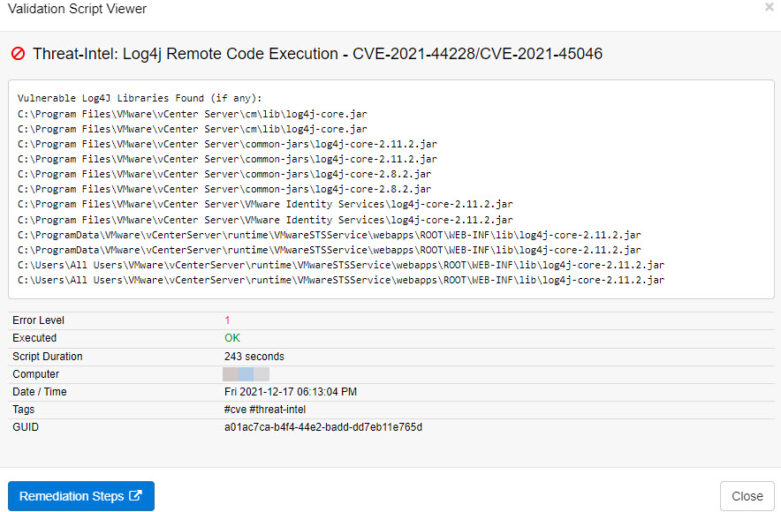 Just when the Microsoft Exchange exploit CVE-2021-26855 thought it would win the “Exploit of the year” award, it got unseated by the – still evolving – Log4J exploit just weeks before the end of the year!

Had somebody asked Sysadmins in November what Log4J was then I suspect that the majority would have had no idea. It seems that the biggest challenge the Log4J exploit poses for Sysadmins is simply the fact that nobody knows all the places where Log4J is being used. Most exploits affect a specific piece of software or hardware equipment, but Log4J is not a separate product, it’s just sitting somewhere on the file system of some Java application – likely among a myriad of other open source libraries.

So how do you find vulnerable instances of Log4J on a network without spending hours running scripts and manually going through software inventory? And, how do you ensure that it stays that way, and a vulnerable version of Log4J doesn’t get installed at a later point?

As a reminder, validation scripts validate best practices across your infrastructure, and are regularly updated by EventSentry to detect insecure settings, outdated Windows systems and potential exposure to exploits.

The Log4j discovery script can be assigned to any Windows-based host, and will scan the hard drive to discover all vulnerable Log4j libraries on a system. In most cases the script takes fewer than 5 minutes to run, and the results can be viewed in the Web Reports under Health -> Validation Scripts -> Status as soon as the script has finished executing. Simply filter on the script name on the Summary page or specify this query to filter the validation script results

Please note that the speed with which the script executes may vary by host since the speed depends on the number files scanned, disk speed etc.